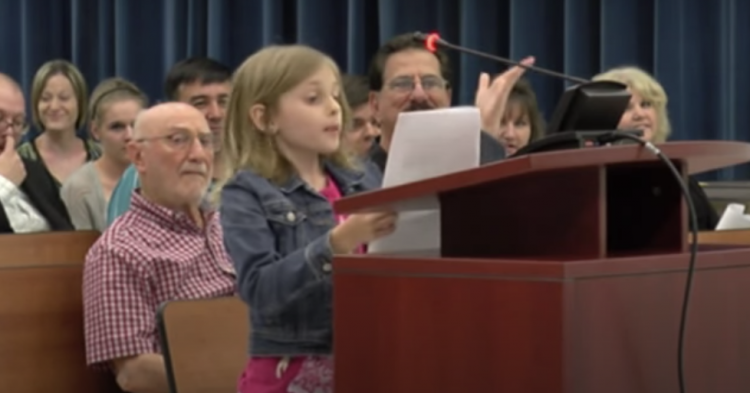 Florida has been struggling with its educational system for decades now. But after the school board pushed through a new standardized test – Florida, teachers, and parents have openly complained about the horrible legislation that is sure to make Florida fall further behind other states when it comes to producing leaders for the next generation. That’s why Sydney Smoot, a fourth-grade student from Brooksville Elementary School, took the floor during the Hernando County School Board meeting on Tuesday to completely “destroy” Florida’s standardized testing decision.

During her speech, Smoot proved that she is a voice who deserves to be listened to. As a passion and articular young girl who wants to pursue her education so her future can be better, she spoke about why Florida needs to get rid of its limiting Florida Standards Assessment and make Florida great again.

For two minutes, she kept the school board’s attention and mesmerized the rest of the audience. No fourth-grader is “supposed” to be able to be this articulate in front of a group of adults. Are they?

Following her speech, the members of the school board rose to their feet to give the spunky nine-year-old student a standing ovation. Whether or not they will listen to her has yet to be determined. Nevertheless, the fourth-grade student completely destroyed the Florida Standardized Assessment in just two minutes.

The FSA was not vetted and was thrust onto students in desperation to bring Florida’s standards up. Smoot pointed out that the test is failing all students across the state.

“Why am I being forced to take a test that hasn’t even been tested on students in Florida?”

However, Smoot shared one objection to the poorly-written test that put the school board to shame. Because she had to take the test recently, the school board forced Smoot to sign a “nondisclosure agreement,” prohibiting her from discussing the test’s contents even with her parents. This worried the child because she does not like keeping secrets from her parents. What dark secrets were the makers of the FSA trying to hide?

“My daughter talks to me about everything,” said Jennifer Smooth. “She was very upset.”

District spokesman Eric Williams claimed that the nondisclosure form was meant to prevent students from talking about the test with their peers. He hoped that by binding tiny children up in legal documents, they could silence all talk of the test prevent it from having more problems than it already had.

“It’s not meant to keep kids from talking to their parents, just from sharing specific questions,” he said.

“I still find it very troubling,” Jennifer said. Why should an elementary school student be forced to sign a nondisclosure-type agreement before taking a test?

Although mom helped her prepare for the speech, Jennifer gave all the credit to her daughter.

“If you know my daughter, you’d know she’s very outspoken.”