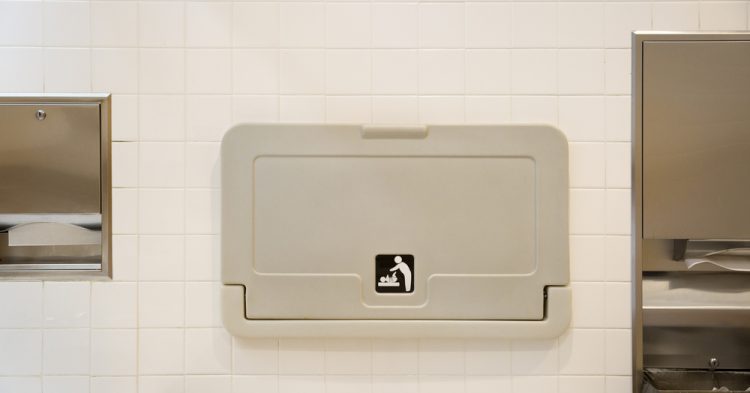 Although society has begun to install baby changing tables in both men’s and women’s public bathrooms, they are not always in all facilities. Sometimes, parent of a young baby must sacrifice their pride at the moment and use a different bathroom in order to gain access to the baby changing table, so they can give their little one a fresh, dry diaper and toss out the old, stinky one.

One father had no choice but to use a women’s bathroom to change his baby’s diaper. Although most people would not be bothered that a man was in the lady’s room because he had to use the baby changing table, one woman got into an argument with the man over the incident and told him that it was totally inappropriate for him to be in the lady’s room because he was a man despite having a little baby that he needed to take care of.

“I am a 31 yo man and was at a large store yesterday with my 5mo son when he did what babies do. I went over to the restrooms and saw that there wasn’t a family/companion restroom, just a men’s and women’s. I went into the men’s room and saw there was a cubicle and a few urinals but no changing table. The sink didn’t have a counter, either.

“I was annoyed, but I went back into the men’s room. No changing table. When I came out, the employee was gone. Keep this in mind. My son has been in his poopy diaper this whole time. So I gave up and headed into the lady’s room which sure enough had a changing table. There was a woman in there washing her hands, and she said, “wrong bathroom, buddy.”

“I gestured to my son and said, “no changing table in the men’s room.” She laughed and said, “bro, that sucks.” Then she walked out. So I rush to change him, hoping to be done before anyone else walked in. I’m almost done when a woman walks in and starts screaming at me. I tried to explain what I was doing, but she kept screaming, “Get out! You can’t be here!” Then she ran out.

“I finished putting the diaper on and rushed out of the bathroom. I saw the woman talking to an employee and decided to leave without my stuff. The employee tried to wave me down and stop me, but I rushed out to my car, buckled my son into his car seat, and left.

“My wife said I absolutely did the right thing, but my mom said I’m an idiot and was 100% in the wrong. My sister won’t stop laughing at me and is no help at all.”

Was he wrong to change his baby’s diaper in the women’s restroom?