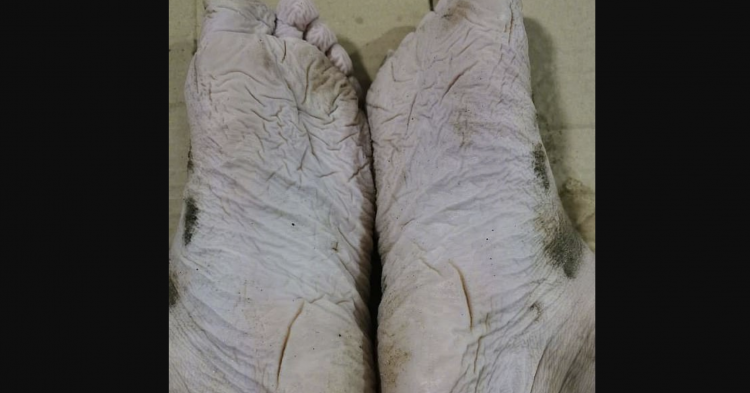 When a Chinese firefighter stood in cold mud for an entire day during a rescue, he had no choice but to work nonstop. After the long shift, the firefighter showed a picture of his feet, which were entirely shriveled. Because the firefighter was among a group of heroes searching for survivors after a mudslide, they worked tirelessly for about thirty hours to hunt for anyone who survived the devastating natural disaster.

The landslide buried nine people in Hubei providence on Wednesday. This firefighter, whose name was not released, was among the team of heroes who dedicated their safety and comfort to hunt for survivors in the disaster. 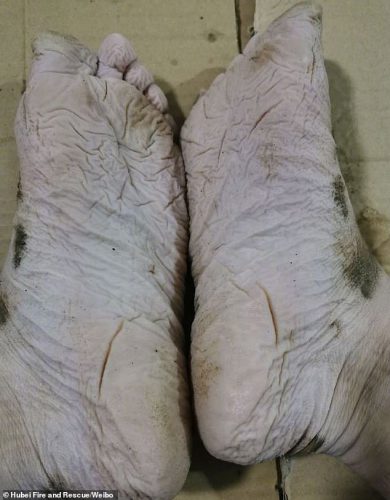 Climate change is currently devastating China in the form of overwhelming downpours. Several provinces have entered “wartime mode” as local authorities fight to save people from the “flood catastrophe” that is many devasting communities in the Asian country.

The firefighters, including the one with the wrinkled feet, did not save the day in the way they would have liked. They found all nine Chinese citizens from the landslide after thirty hours of hard work. However, eight of them were dead. One elderly woman survived the landslide and is listed as being in stable condition by the Hubei Fire and Rescue team.

The fire brigade uploaded the photo of the firefighter’s feet to show people on social media what their firefighters are working hard.

One commenter wrote: “This is heart-breaking. You are a true fighter. Thank you so much for your dedicated service!”

Another one said: “Oh my god, so much respect to you! Please stay safe.”

Chinese authorities are responding to the unprecedented rainfall with an emergency response plan. Flooding has devasted provinces, including Hubei, Jiangxi, Hunan, and Guizhou.

“Extraordinary” heavy rainfalls have killed 141 people already. About 2.2 million people have been evacuated.

2020 has blasted the world with the coronavirus as well as the consequences of decades of damage to the environment. Countries like the United States and China do not have strong green plans that can counterbalance the destructive waste being pumped into the local environment. When these causes are ignored, damaging effects come from them.

Authorities also issued a warning about the rising levels of the Yangtze River. If the rain keeps pouring down like it is right now, the river could reach its third-highest level ever in the city of Wuhan, which is home to eleven million people.

On Sunday, Wuhan leaders held an anti-flood meeting and identified the threat of flooding in Wuhan to be “extremely severe.”

Readers on Daily Mail have shared dozens of comments about this firefighter and the devastation in China right now.

“All over the world, first responders are the very best of us,” a Boston resident wrote.

“God bless all the first responders who selfishly sacrifice in order to help save complete strangers. Heroes,” wrote a Virginia man.

“Some professions like fire-fighting are a calling and not just a job. Their commitment and dedication are truly inspiring.”

What do you think of all the strife 2020 has cast upon the world?