Foster Mom Takes 3 Kids To Walmart, Apologizes To Cashier For Not Being Able To Pay 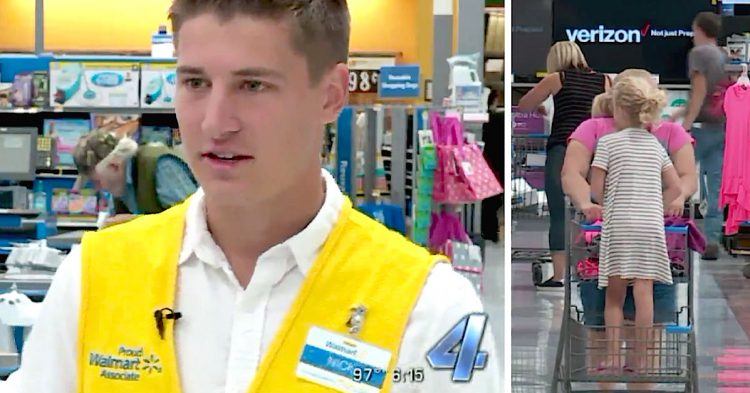 When Nick Tate got hired by the largest company on the planet, he could not help but feel excited. Although the 20-year-old was just going to be a cashier at his local Walmart, he felt part of a global community of workers helping bring all sorts of items to people at great prices. Because he saw his role in the bigger picture of the Walmart ecosystem, he always brought a positive attitude to work and was known for his generous smile and his talkative nature, which was a benefit when dealing with customers.

On a busy evening, while Nick was working his shift, he came across one woman who was visibly flustered. The woman, who was a foster mother, had two little girls and a baby with her. The little girls were toddlers and were out of control. Meanwhile, the baby was wailing and crying. The foster mom struggled to get the toddlers under control, but she couldn’t figure out what to do. The line behind her started to get longer and longer, and other customers were becoming very frustrated that this woman was unable to keep her foster children under control.

When she came up to Nick Tate at the register, he looked at her and said, “One of those days?”

The woman felt that everyone was judging her. Because Nick’s remark was very indirect – despite being a way to express his empathy with her tough situation – she was overcome with emotion. She profusely apologized to him for taking so long in the line. Then she pulled out a WIC card and admitted that it was going to be a struggle for her since she’d never used one before.

“I’ve never used WIC before,” she told Nick the cashier. “I don’t know how it’s going to go.”

Because she had already held the line up for so long at the Newcastle, Oklahoma Walmart, the last thing she wanted was to add more wait time to the patient people who had been held up behind her.

“She had a good amount of items, and most of them went through, but she apparently didn’t have the right formula, and it wouldn’t go through,” Tate told CBS News. “We had to run a separate transaction for the rest.”

That’s when Nick stepped around the register and did something that made the foster mom break down in tears.

“[There were] more customers, more grumbling and dirty looks as they moved to the other lane, and I’m frustrated and trying not to cry,” the customer, who wishes to remain anonymous, wrote in a Facebook post. “At this point, a lady we know came up and asked why I was causing so many problems. I told her I was just failing as a foster mom because I can’t figure out WIC and almost burst into tears right there.”

Then Tate paid for her $60 worth of groceries.

“I already had my card out at that point. I felt like God was telling me to pay for it,” Tate explained. “The second it didn’t work, I swiped my card.”

The woman was overcome with gratitude for the generous Walmart cashier.