Mom Keeps Bathing Her 11-Year-Old Twins Together, But She Says She Has An Excuse 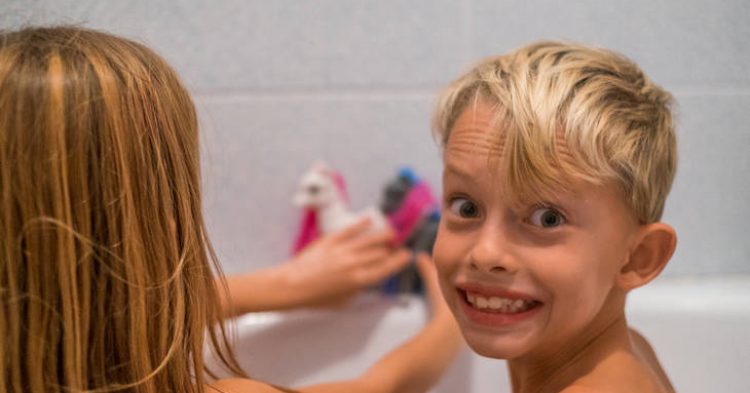 Moms and dads don’t always agree on the specific ways they should raise their children. But one dad believes that his eleven-year-old twins are way too old to be sharing the bathtub together. Because his boy-girl twins are about to enter puberty, dad felt that it was time for them to start bathing separately instead of sharing the tub during bath time.

But mom refuses to let the children grow up and believes that it is more than normal for the siblings to bathe together despite one being a boy and the other being a girl. 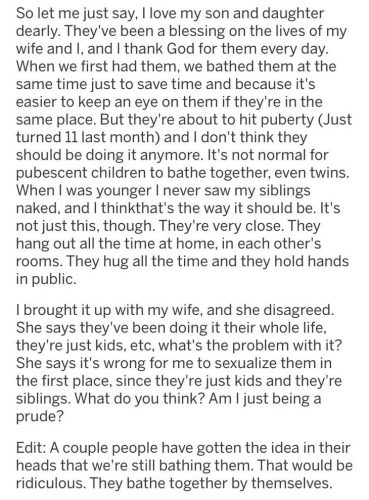 Dad decided to get advice from the online community because he felt that it was weird that his eleven-year-old boy and girl were still sharing the bath. Although he told his wife about this criticism, she thought he was crazy. Based on his experience, he knew better than to start a fight with his wife about his children’s bathing habits unless he planned to sleep on the couch for a few days. And the couch was not as comfortable as the bed.

Dad writes: “So let me just say, I love my son and daughter dearly. They’ve been a blessing on the lives of my wife and me, and I thank God for them every day. When we first had them, we bathed them at the same time just to save time and because it’s easier to keep an eye on them if they’re in the same place. But they’re about to hit puberty (just turned eleven last month), and I don’t think they should be doing it anymore. It’s not normal for pubescent children to bathe together, even twins. When I was younger, I never saw my siblings naked, and I think that’s the way it should be. It’s not just this, though. They’ve very close. They hang out all the time at home in each other’s rooms. They hug all the time, and they hold hands in public.”

Dad has concerns that his children will start to appear weird in school and other public places. Because the brother and sister are getting older, he wants to make sure they fit in with society and don’t become outcasts.

“I brought it up with my wife, and she disagreed. She says they’ve been doing it their whole life. They’re just kids, etc. What’s the problem with it? She says it’s wrong for me to sexualize them in the first place, since they’re just kids, and they’re siblings. What do you think? Am I just being a prude?”

Because dad had started a good conversation, he received a lot of responses. This prompted him to edit his initial post with the following addendum:

“A couple of people have gotten the idea in their heads that we’re still bathing them. That would be ridiculous. They bathe together by themselves.”

People were stunned that dad is only questioning the boy-girl bathing habits now that they’re turning eleven.

“They should’ve been separately bathing since at least five to six years old. I started showering by myself at around that time.”