Nobody Knew How To Save This Moose Stuck On The Railroad Tracks. Then A Voice From The Back Spoke Up : AWM

Nobody Knew How To Save This Moose Stuck On The Railroad Tracks. Then A Voice From The Back Spoke Up 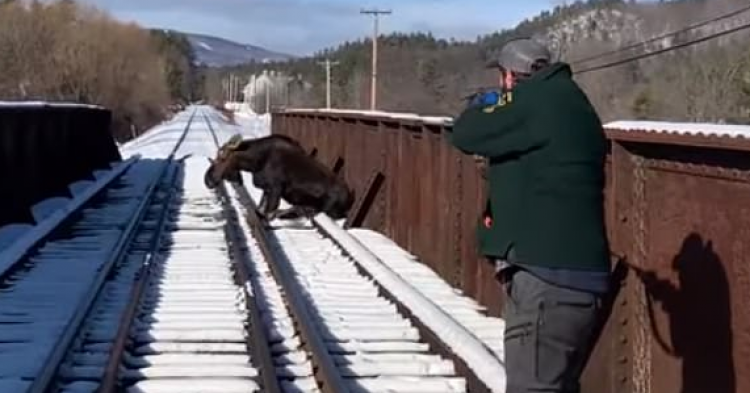 When a massive 700-pound moose got stuck on the railroad tracks in Vermont, no one knew what to do. The creature was so big and dangerous that there was no way someone was going to be able to get close enough to it to free its hoof. Nevertheless, the rescue team arrived in Cavendish, Vermont, with high hopes that they’d be able to solve the problem and get the moose freed from the train tracks.

Rescue workers had to wrack their brains to figure out a way to free the moose. That’s when someone had the brilliant idea to use a construction crane. Because cranes can lift extremely heavy loads, it was the perfect solution for this 700-pound problem. 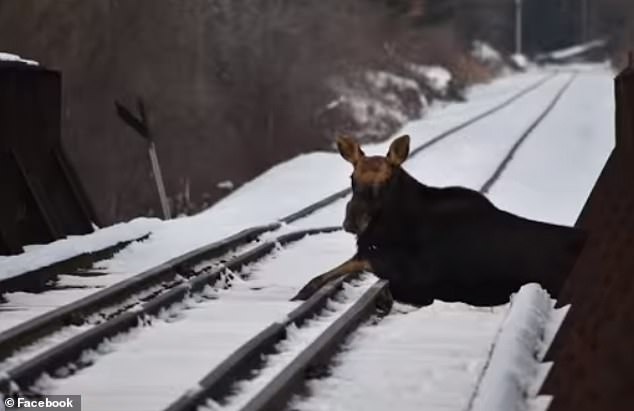 Before rescue crews attached the moose to the crane, they sedated the trapped beast. Then they wrapped it up and attached the wrap to the crane. Only then were they able to get the moose off the train tracks, so they could relocate the creature back into state lands where it was free to go back to life as normal.

The report of the incident first reached Vermont Fish & Wildlife officials on Wednesday. When they heard the news, they knew that they were the ones responsible for lifting this big moose off the train tracks and getting it freed from the horrible situation. 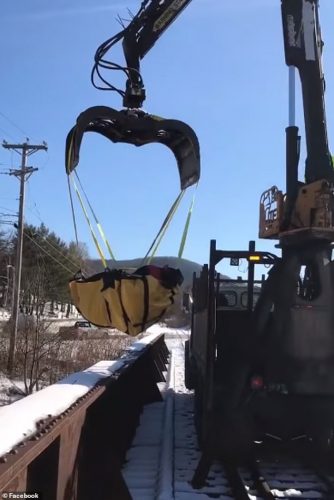 Footage shows the moment a game warden approaches the moose with a tranquilizer gun. Although the moose tries to stir, it cannot free its hoof from the train tracks. At this point, the moose gets sedated and then placed into the large sling.

From here, officials use the crane to lift the huge moose and place him down on a waiting part of a train. Meanwhile, biologists and other interested experts watch to make sure everything goes according to plan.

When the moose is safely on the train bed, the train begins to move and transports the moose a few miles down the track to a wooded area that would be safe for the moose to roam. At this point, the moose awoke from its drug-induced slumber and wandered off the train into the safety of the Vermont forest. 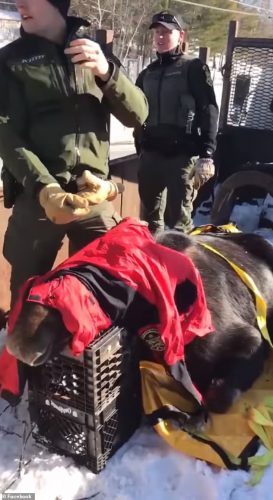 Vermont Fish & Wildlife admitted that these types of rescues are not always successful.

“The focus of the Vermont Fish and Wildlife Department is on population-level threats to species, and it is rare that this kind of intervention makes sense, because of the risk posed to the animal and responders. Such recoveries are many times not successful. It’s great to see that in this case, it ended well for those involved, and for this very fortunate moose.”

Vermont Fish & Wildlife said that moose populations are “increasingly under stress” because of climate change. 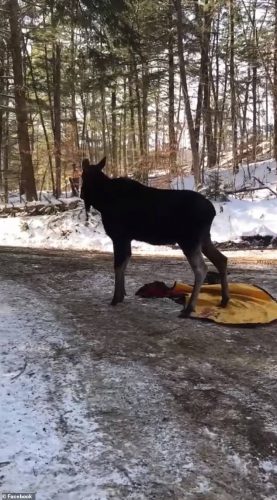 “Wildlife biologists are concerned that warner falls and early springs are increasing winter tick numbers that can have detrimental effects on moose.”

These ticks suck enough blood from moose to weaken them. There can be tens of thousands of winter ticks on a single moose.

What do you think of this footage?