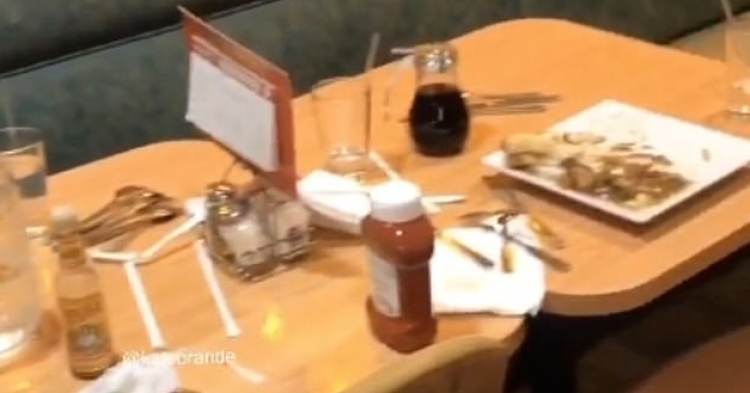 A young waitress is causing controversy after posting images of two deserted tables at the restaurant. Although waitstaff is being hit extremely hard because of the COVID-19 pandemic, few people were willing to show sympathy to this young eighteen-year-old server named Kaitlyn Brande. The young waitress shared images of two tables online and pointed out that the table that had baby boomers at it was far messier than the one with younger patrons.

Brande shared the controversial video to the video app TikTok where it received more than one million views. The first table that she shows reveals a dirty table left behind by people she labeled as “boomers.” This is what she said:

“OK, here’s all I’m saying, this is a table of five boomers [where] I took some plates out of the way already.”

The table with the boomers was a mess. She had already cleared away some plates, but it was covered in soiled napkins and other trash.

After showing the boomer table, the young waitress then scanned the camera over to another abandoned table. This table was occupied by a group of people she considered to be in the “Gen Z” generation. That means they are young people in their late teens or early twenties.

The table, which was occupied by six people, was far less messy than the table had by the boomers.

“This is a table of six Gen Zs,” Brande says. “They did that. Just saying.”

Boomers felt that Brande was trying to shame them into being cleaner. The young waitress told BuzzFeed that was never her intention at all. She just wanted to show that the younger people stacked up against their plates and that she wanted to praise them for being more considerate of her and the hard work she does at the restaurant.

“I’m not saying I expect people to ever stack their plates like that, because hey, I’m a person too,” Brande says. “All I’m saying is it was cool and helpful of the younger people, and I appreciated it.”

Many viewers of the video agreed with Brande that the Gen Z customers were a lot neater than her boomer customers. Some viewers felt that the younger generation has more empathy than those born decades ago.

“Gen Zers have empathy that is rare to find in older generations,” one user wrote.

“She’s not complaining about the work,” another added. “She’s just showing the fact that boomers think they are owed respect when they can’t even show respect.”

Although she had a lot of support, Brande also got her fair share of people who disagreed with her subliminal message.

“All I’m saying is that it’s not about being boomers or Gen Z, it’s about thinking about others or not,” one user wrote.

Another person wrote, “It’s not the customers’ job to clean the table … don’t be lazy. I have worked in the industry and never expected anyone to do my job.”

What do you think?

someone said “it’s how they left the planet for us too”. pic.twitter.com/zlhJWcktkU