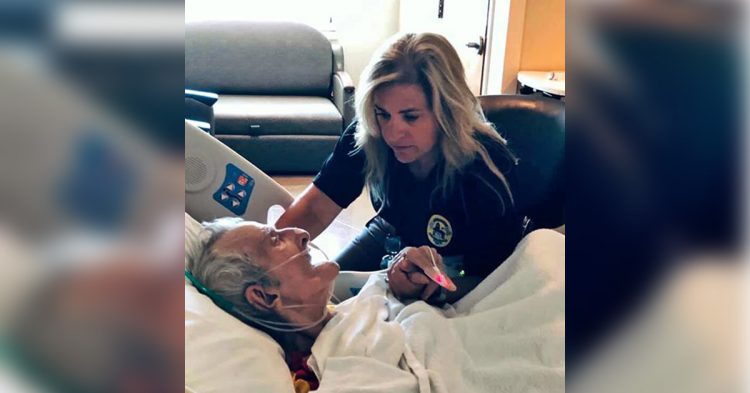 Police Officer Dena Walker Pauly made a commitment to protect and serve her community. And while Bob might not have been a taxpaying member of that community, she still felt that as a public servant of Lawrenceville, it was her duty to do what she could to show this dying old homeless man some basic human kindness. With no one by his side except a law enforcement officer he had befriended, Bob found himself dying all alone.

Now, an image of Officer Pauly’s dedication to Bob has started circulating on the internet after it was posted to the Georgia Law Enforcement Facebook page. Although Bob passed away on July 16, 2019, he did not pass alone. With Officer Pauly there by his side, he was able to leave this world in peace. And the community thanked her for her support. 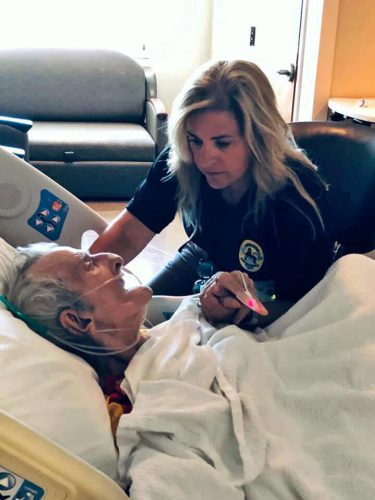 “You may look at this picture and see a caring granddaughter comforting her beloved grandfather as he lies in a weakened state in a hospital bed.

“The truth is that this woman is a police officer and she met Bob only two years ago while she was on duty.  Lawrenceville Police Officer Dena Walker Pauly’s life was changed forever when she was dispatched to a local pawn shop, where the staff was unsure how to help him.

“Life has not been kind to Bob. He’s been on his own since he was a child and had no known family.  He was homeless most of his life, and a stroke eventually left him non-verbal.  His life is a series of sad stories strung together by poverty and loneliness.

“Officer  Pauly arrived at the pawnshop and was also unsure how to assist Bob, but she sensed he needed help and offered to take him home so he could show her what he needed.  She was horrified when she saw Bob’s living conditions.

“She may have been dispatched that day by police radio, but we have no doubt she was really sent by God.  She immediately addressed Bob’s deplorable living conditions and taught him basic skills such as throwing garbage in the trash can rather than the floor. She’s ensured he has food to eat and routinely cleans his small apartment.

“She eventually sought and received a Power of Attorney for Bob’s medical care. He’s been in the hospital since May, and today was an important day for Bob and Dena.

“Officer Pauly made the difficult decision to begin hospice care for Bob, so she held his hand and told him many times that she loved him. It’s quite possible she’s the first person to ever utter those words to this poor man.

“This photo depicts the true nature of law enforcement officers.  We are drawn to this profession because we care.  We care so deeply that it hurts sometimes.  We see the worst, but sometimes we also get to see the best.  And we have opportunities to truly make a difference for people, like Bob.

“Officer Pauly, your dedication and commitment to your oath of office, and fellow man embodies what it means to be a Police Officer.  Stories like this happen every day, but because they don’t fit a certain narrative, no one hears about it.”

What do you have to say about Officer Pauly’s contribution to her community?