Police Called To Scene Of The Largest Snake Anyone Has Seen, His Body Never Ends (photo) 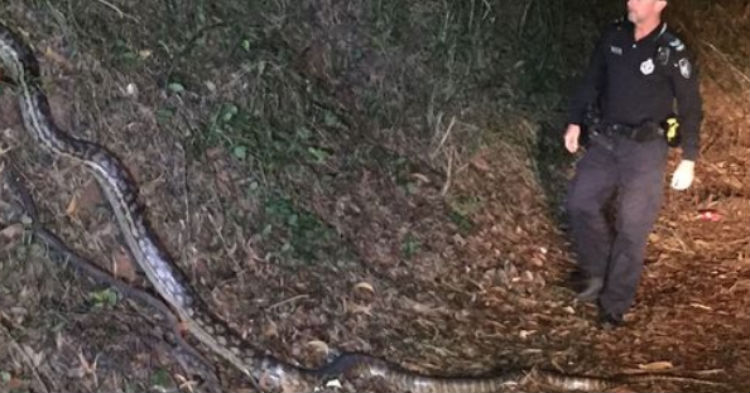 Australia is known for its many creepy crawlers and the residents seem to be used to seeing spiders, snakes and random bugs on a regular basis. In fact, one family recently found a snake hanging around inside their house in children’s playroom of all places. Residents always have to be prepared to come face to face with these critters, as they tend to sneak up on them in the most bizarre places.

Let’s not forget the massive size of these critters. Compared to the snakes and spiders that are found in the United States, the bugs and reptiles in Australia are usually quite bigger. Or maybe it’s just that they make themselves present more often.

One massive python certainly made himself present recently. When two police officers were out on patrol one night near Wujul Wujul in northeast Australia, they came across a python that was of record-breaking length. You know that a snake is long when even the residents of Australia have to pull over for a photo op of the reptile. The two officers spotted the snake from inside the car where they were sitting, but they wanted to see just how big it was so Sergeant Ben Tome sent his colleague, Acting Senior Constable, Chris Kenny out to stand next to the beast. The photo says it all, as the Queensland police officer looks miniature next to the python, which looks like it could wrap around the body of the officer several times.

Wanting to show off their unusually big find, the officer posted the photo alongside the following comment…

“Boss, we’re going to need a bigger ladder. During a night patrol near Wujul Wujul officers had to wait for this scrub python to cross the road.”

The snake didn’t stick around long and slithered away shortly after the photo was taken. 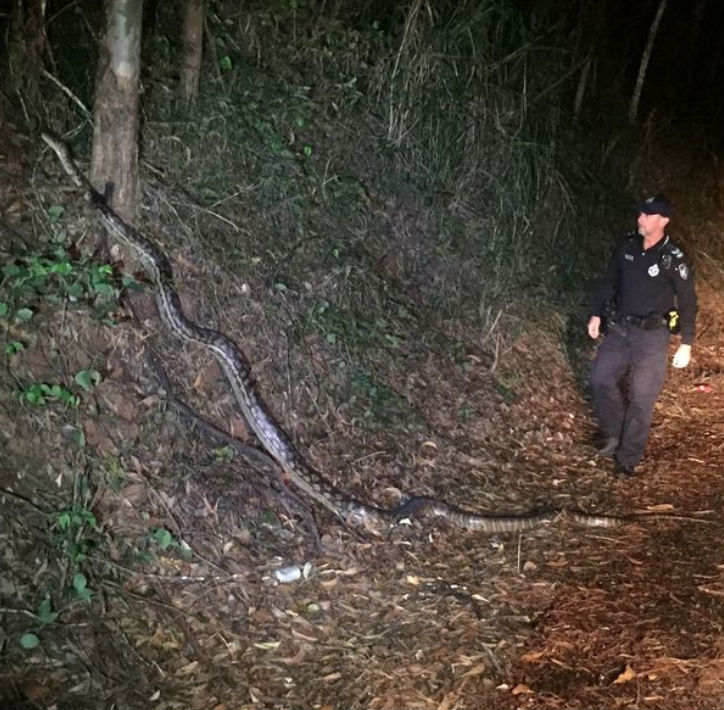 “I would have to turn around. My feet wouldn’t even be able to touch the pedals…. they would be on the windscreen? That’s a whoppa!!!”

The scary part about these scrub pythons is that they have a tendency to blend into their surroundings, which is probably one of their God-given talents that allows them to sneak up on their prey. In the photo taken by the police officers, the snake is massive but he matches the colors of the wooded area that he is slithering on. The fact that they can sneak up on you in such a way makes them even scarier for some. This officer is one brave man for approaching the beast, but apparently, this is fairly normal in Australia.