They Saw Something Moving Under The Snow. Once They Started Digging, They Couldn’t Believe Their Eyes 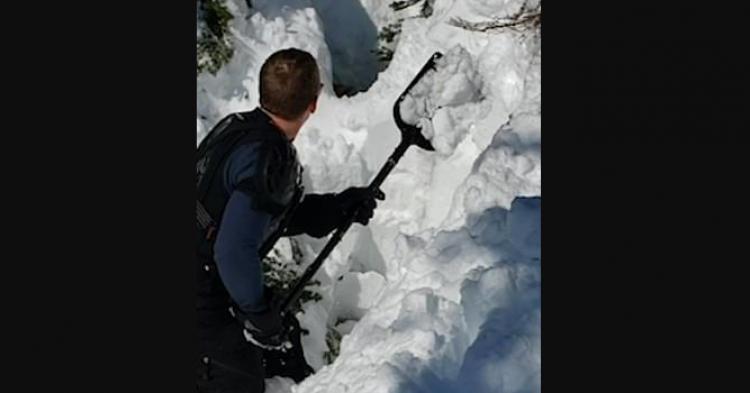 Everyone needs a little help sometimes. It doesn’t matter if you’re an NFL all-star or a busboy, there’s a moment in your life when you need someone to stretch out their hand and lift you up. And that applies for animals like this moose that got trapped down in a deep hole in the snow. Fortunately, a group of snowmobilers riding in Newfoundland, Canada, happened upon the trapped moose and were able to lend a helping hand – and the animal proved to be truly grateful.

The group of snowmobilers included Mark Weir and his friends. They are all Good Samaritans who were willing to risk their skin to save a wild animal from a tough predicament. However, the members of this group were not going to leave the moose stuck in the deep hole in the snow if they were capable of lending a helping hand, which they were. 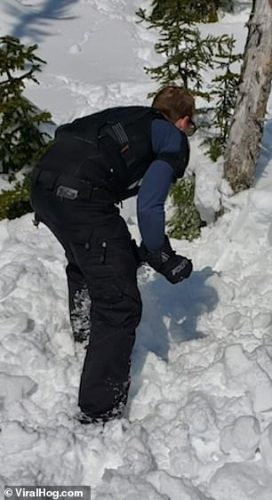 As it turned out, Weir and his friends had watched a herd of moose walk along the edge of a frozen pond. Suddenly, one moose disappeared out of sight. It didn’t take the snowmobilers long to figure out that the moose was in a dire situation. They wanted to help. They’re nature lovers and animal lovers.

In the video, you see Mark walking in the snow toward where the moose fell. The snow if very fresh and deep. No wonder this moose lost its way and fell into the deep hole! 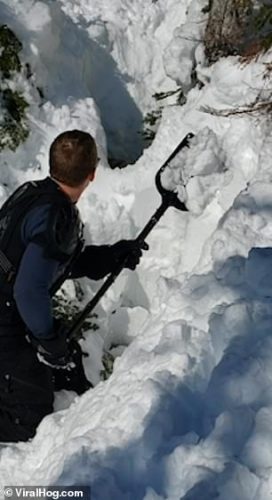 “[We were] going along and see a moose, and there’s a hole, and the poor little guy falls down in it,” the man behind the camera said. “So I guess we are going to have to try and get him out.”

Mark shovels into the thick snow. You can tell how deep it really is. You can see the top of the trees poking through. No wonder this moose fell so deep down into it. 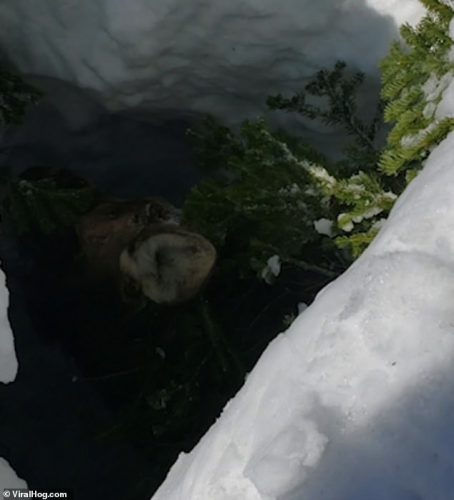 Mark said, “We’ve got to leave that wall there until we are sure it can get out. Otherwise, we are just going to have his head in the way while we are shoveling. We’re coming for you, buddy.”

The friends use the shoves to dig a ramp for the trapped moose to escape. It keeps poking its head through the snow to see what is going on. It is clearly a young moose – or a female – because it does not have the antlers often associated with moose.

When the time is right, Mark instructs his friends on how to make it clear for the moose to escape. 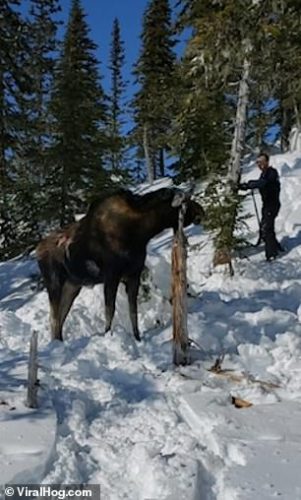 He said, “Alright, just knock down the wall, and we’ll have to run because I don’t know if he is going to be angry or happy.”

At this point, the guy up front breaks through the hole and sets the moose out onto the ground. The moose eases out of the hole. It is huge. 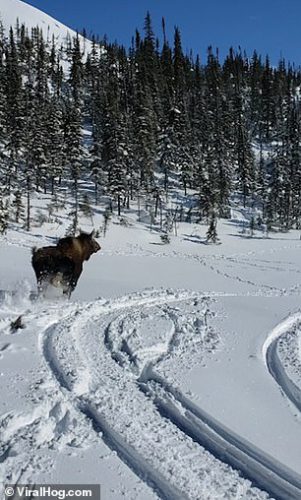 The men dash out of the moose’s way. They don’t want to block it from its escape.

“Here he comes. There you go, buddy. Now go away from us not towards us, please… go find your friends.”

What do you think about this moose rescue?