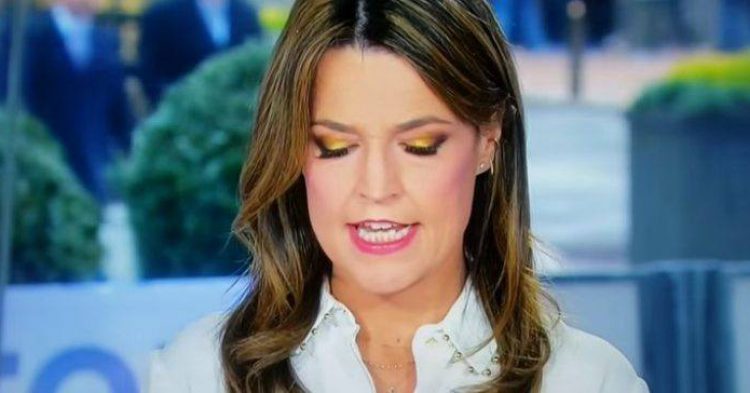 Live television reporters have to deal with a lot of things that most regular folks just don’t have to. From looking perfect every day, making sure they do their research and staying composed on camera for hours on end – it’s pretty impressive when they get it right. But when they get it wrong, we all get to enjoy the blunder because every moment their face is on screen is recorded forever.

On smaller stations, the news anchors are given some freedom to get creative, like Dan Thorn, who you may know as the dancing anchor on WVNS-TV in West Virginia. But on bigger networks like Fox and MSNBC, anchors are required to remain calm, composed and always on point.

Savannah Guthrie is one of the hosts of NBC’s long-running Today Show and often is a crowd favorite. She has been the main co-anchor of the show since July 2012, a post she doesn’t intend to give up any time soon.

During a recent episode, Guthrie was caught on tape making a very uncharacteristic mistake. She said something that we all sometimes let slip, the s-word. You know what I am talking about. But when most of us let a curse word slip, we aren’t being watched by thousands and thousands of people!

Viewers instantly starting reacting to the hilarious situation and commenting about it online. The person in charge of the broadcast was forced to react too by turning off her mic and cutting to a commercial soon after. It’s an easy way to cover a gaffe and is often used in live news, just not usually on such a high-profile and established show.

Many commenters felt that this little gaffe made the Australian-American broadcaster more relatable to them, including Jim Shoes who said, “Makes me like her more.”

Others said that the s-word wasn’t the only swear word that Guthrie said on that unlucky day, but the station managed to block out the other one.

“She totally dropped the f-bomb after she said [that], I watched it live,” said another commenter.

Guthrie may have upset her bosses at NBC, but there hasn’t been any action in response to her blunder. She publically apologized for swearing on Twitter, even making a joke about not knowing that the mic was on. We’ve all made mistakes and the important thing is to own up to them.

“Check, check – is this thing on? Yeah I guess it is. So sorry guys. Thanks for being kind and understanding. And guess it’s good thing I don’t wear a mic all day. #ohdarn,” she tweeted.

This isn’t the first time that a news anchor has sworn on live television, but another case actually ended up with the anchor being fired. A.J. Clemente was fired after his first day on the job at a local news station in Bismarck, North Dakota. He had a lot less experience on live television that Guthrie though, but perhaps that should make it more understandable for him rather than her.

What do you think about her mistake on live television? How would you react?