VIDEO: Watch What Happens When A Doctor Tries To Remove A Beach Towel From A Python : AWM

VIDEO: Watch What Happens When A Doctor Tries To Remove A Beach Towel From A Python 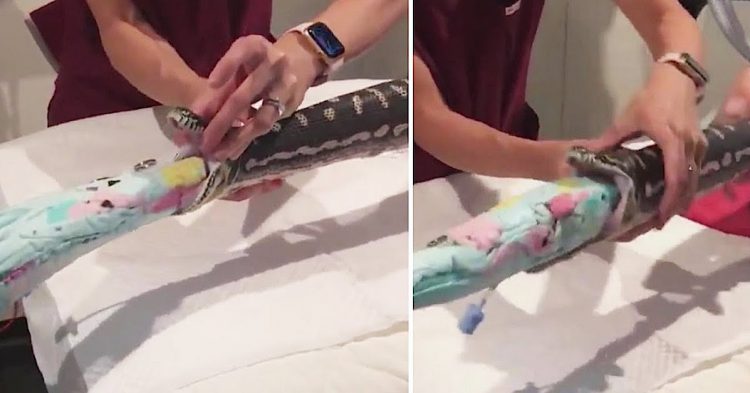 Doctors and veterinarians see all types of issues as they go about their daily routines. But veterinarians in Australia have a lot more to deal with when it comes to certain animals than those in America. Australia is a country known for its massive snakes and large spiders – and there are a lot of people who keep these dangerous and terrifying animals as pets.

One Australian family kept a python named Monty as a pet. The critter was eighteen-years-old and had lived a long, healthy, and happy life. But on this particular day, Monty had eaten something it would quickly soon to regret.

Unfortunately, the snake swallowed an entire beach towel before it realized the thing was not edible. By the time the snake wanted to expel the towel from its insides, it could not get it out without some help. Thankfully, the veterinarians were ready to aid the snake in getting the beach towel out of its body.

The video below shows as the vet struggles to get the beach towel out of the snake’s body. It’s an ordeal, unlike anything they do on a regular basis. While these vets have dealt with some weird situations, they’re

When Inside Edition reported on this issue, they wrote the following in their description of the video on YouTube: “This massive Australian snake had quite the stomach ache. “Monty” is an 18-year-old female Jungle Carpet Python weighing eleven pounds and measures in at almost ten feet long. She had swallowed something unsavory the night before. Luckily, veterinarians at the Small Animal Specialist Hospital in Sydney, Australia, came to the rescue. Using only forceps and their bare hands, the teams of vets pulled out a full-size beach towel from the snake’s stomach, saving its life! Watch as the team celebrates their heroic feat.”

Viewers shared a lot of comments about the footage. The following are just a sampling of what people had to say.

“Must feel relieved to have that out poor thing is probably starving.”

“What the hell made that snake want to eat a damn towel.”

“I may be shocked & grossed out, but I’m so glad the Python is saved.”

“Everybody’s cheering till they realize a person was probably sunbathing on that beach towel when the snake ate it.”

“Props to the wonderful veterinarians!!” one person wrote.

“I hope they will feed it good now, and return it to a place where he could get food on a regular basis! Poor guy, how uncomfortable that must have been to have ingested a whole beach towel!!”

“It honestly looks like they’re trying to save the life of the towel instead.”

“What bothers me is that they pulled his/her head hard. That must have hurt for that snake.”

“Just looking at that snake after they pulled the towel out makes me think how bad it actually had it.”

Without a doubt, this footage is shocking. Who would have thought that a python would swallow an entire beach towel before realizing it didn’t taste good and wasn’t good for digestion?