When I Found Out How These Vegetables Were Stored, I Vowed To Never Eat Them Again 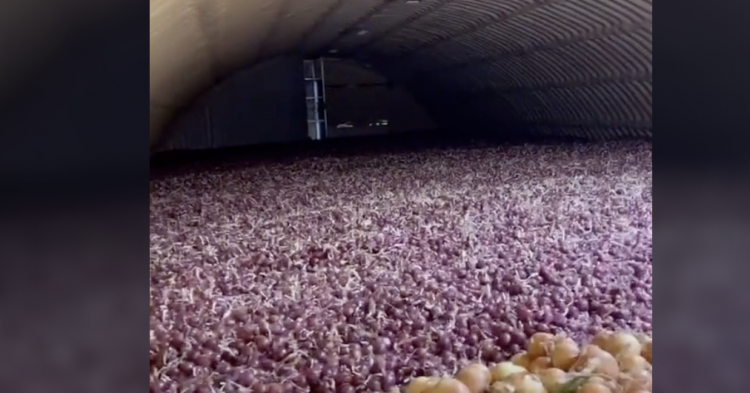 China’s TikTok has changed American culture forever. It has pulled by the veils of society that have been closed to the American people for decades and shown us secrets we have never been meant to see. China knew what it was doing when it pushed TikTok onto desperate Americans during the start of the global pandemic, and now it may very well affect the American food chain.

One farmer, who loves the Chinese-created technology, decided to film his process and terrify Americans everywhere. Because he is an onion farmer, Shay Meyers wanted to show fans of onions just how they were kept preserved until they were ready to be sliced up and cooked.

Meyers represents a family that has been dedicated to farming for three generations. He resides in Oregon and has decided to show you how his farm works from behind the veil. By recording quick clips and sharing them via the TikTok app, he has pulled back the curtain to show the “crazy” way onions are collected and stored. And now he may have hurt his own industry thanks to the app. Why? Because now people are afraid to eat onions1

The video clip (which has amassed a staggering 2.6 million views since its release) shows a massive collection of onions lying on the ground in some sort of secret hangar. It’s really just a storage unit, and it is where the farmer puts his produce when it is the onion offseason.

“Why do we store onions?” he says in the clip. “Well, we live in North America guys, we’re not close to the equator. We have to store our fruits and vegetables, so we have them later.”

Although winter onions are “not always a year old,” the ones he sells sometimes can be. By showing the world how he keeps onions in a storage unit, Shay Meyers damaged his family farm’s reputation and showed the American people the truth about grocery stores. The fact is, the “fresh” produce you may be buying might have been hanging out in Meyers’s storage unit until he found a buyer willing to pay top dollar. Do you like the idea of eating year-old onions from Oregon?

“Omg I have literally never thought about these logistics,” one user wrote.

“So you’re telling me they get stored for months at a time, but my two onions go bad after a few days in the fridge,” another added.

“Isn’t this supposed to be a secret?” a TikTok user asked.

Meyers then sat on the produce, which he will sell to stores. If you purchase onions from Shay Meyers’s family onion farm, you never know if they’ve been sat on or not.

Although Meyers confirmed that if you buy onions at the beginning of October, they are probably coming to your grocery store “straight out of the field.” However, if you buy onions from November to April, you’re likely devouring warehouse-stored onions.

“Otherwise, everything would have to come from South America,” he added.

Are you shocked by how this Oregon farmer stores his onions?