Woman Calls 911 After Her Horse Falls Into The Pool : AWM

Woman Calls 911 After Her Horse Falls Into The Pool 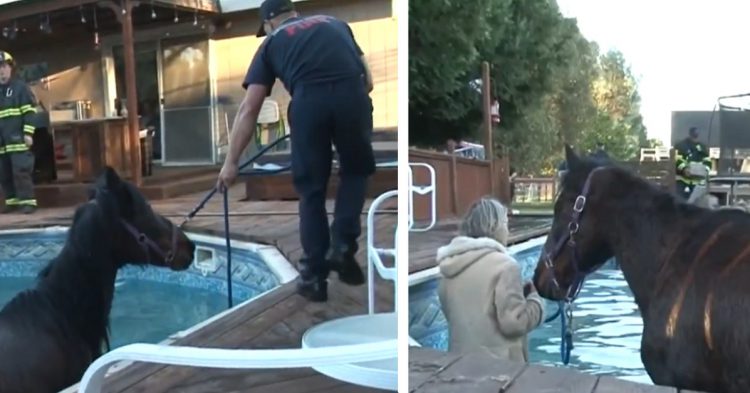 There are two things that most children want at some point in their lives – a horse and a pool. Well, one woman decided that life would not be complete unless she finally fulfilled this childhood wish and got herself one of each. However, pools and horses don’t always mix that well, and as one woman from Sonoma County, California, learned, pools can be downright dangerous when they’re open and accessible to a horse.

To the woman’s horror, the horse fell into the Sonoma County pool and was writhing in agony. The poor creature was stuck and unable to free itself from the confines of the luxury ticket item – which inspired the woman to call for help. She picked up the phone and dialed 911.

Firefighters arrived on the scene, and yet they were not able to get the horse out of the pool easily. They needed to cut away at the pool’s deck in order to get the horse to freedom – and even then, it was not an easy thing to do.

The horse was named Spirit, and the animal had no shortage of that as she found her life in jeopardy. She struggled valiantly as the firefighters tried to get her out of the water – but eventually, she realized that they were there to help her and wanted only the best for her.

Homeowner Katy knew that since the pool water was cold, she needed help. The firefighters arrived just in time to help get Spirit out of the cold water.

Footage of the incident was captured on March 2, 2020. In the footage, you can see how the firefighters cut away at the pool so the horse would be able to get out of the trap.

KPIX CBS wrote the following description on their YouTube video: “A horse that fell inside a chilly pool at a Sonoma County home was rescued this morning by crews using power tools to cut a path for it after it was not able to get itself out.”

People shared their thoughts about the horse getting stuck in the pool. They didn’t hold back the punches when sharing their opinions.

“What would be the cons to dry out the pool (it would stop freezing the horse), and to throw wet sand to make a ramp so he could get out safe and more quickly and keep the pool intact? That cross my mind. Maybe with the stress, they just did the first thing it came.”

“What did John Wayne do in this situation?”

“Hopefully the lady who owns the pool and the horse (is paying for the rescue services). And she should put steps in it this time. All kinds of animals die in pools, children too. Was the horse thirsty? Poor thing.”

Because the horse got trapped in the pool by accident, viewers had sympathy for the animal. Most people felt that the woman should have done a better job of protecting the horse from the pool.

What do you think about this footage? Should the woman be more careful?